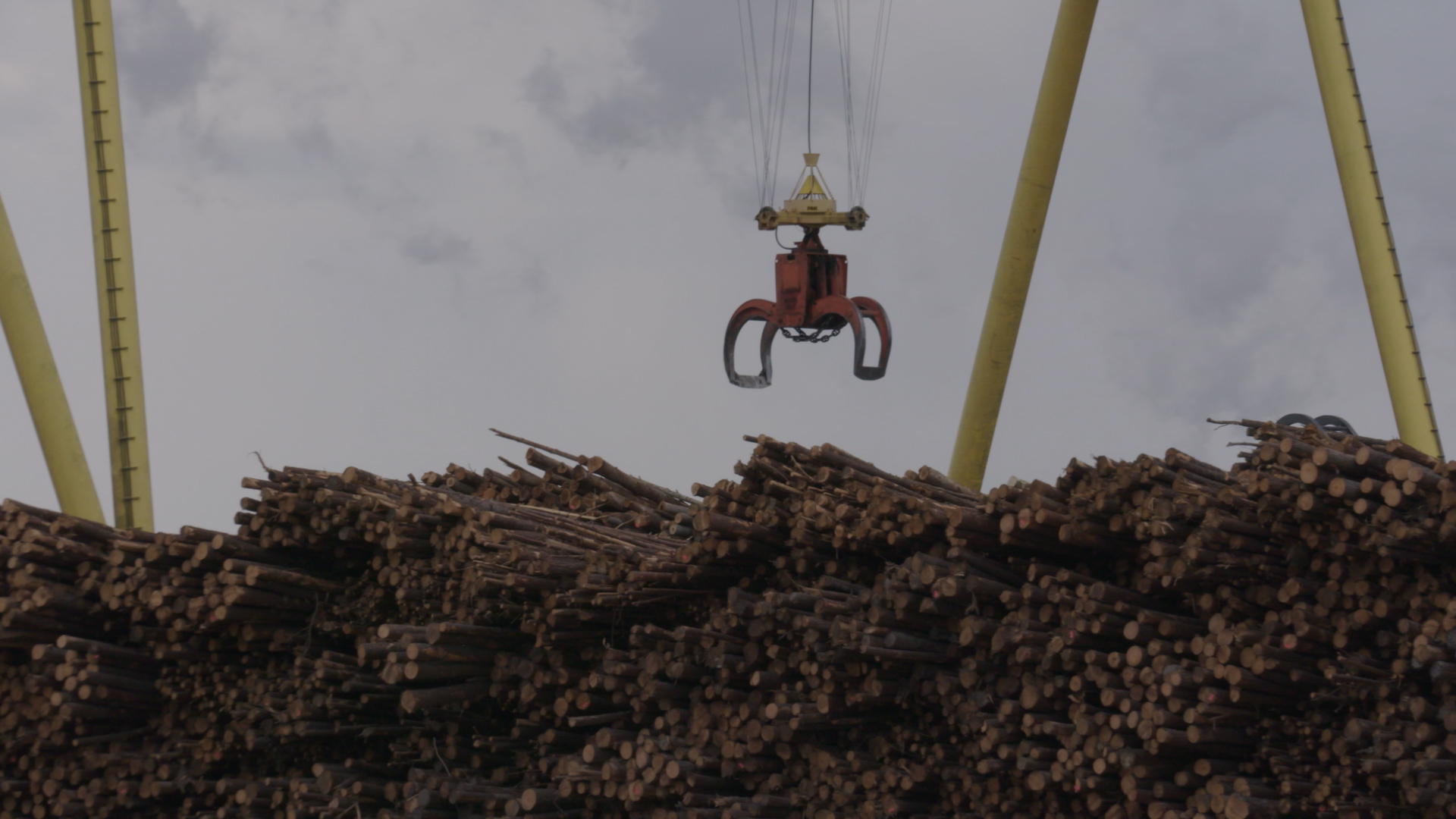 How and why did you pick the topic of the biomass power industry for a film?

As a result of our last film, entitled Taking Root: The Vision of Wangari Maathai about the Kenyan Nobel Peace Prize laureate Wangari Maathai and the tree-planting movement she founded called the Green Belt Movement, we were very tuned into forests. An interested funder asked us if we’d heard about the biomass industry, specifically as related to burning trees to generate electricity. Up until that time, and being from New England where many people heat their homes with wood, we thought of biomass as small-scale and “green” because of our limited knowledge and the sustainable-sounding “bio” label. We started looking into the biomass industry and forest-fueled electricity and were stunned by what we discovered. This industry, along with its devastating effects on forests and its contribution to climate breakdown, was flying under almost everyones’ radar. As a result, we immediately realized that a film about the biomass industry was important and extremely timely for the fate of forests.

Is biomass “carbon neutral” or is this claim greenwashing?

As with the question of whether the climate is changing, there should be no equivocating on the subject of whether biomass is carbon neutral. This is not debatable. First, when burning wood is compared with burning coal, it’s a scientific fact that more CO2 per megawatt hour of energy produced goes up the stack into the atmosphere — in some cases, when burning green chips,  as much as 40-60 percent more. Biomass can only be considered carbon neutral if you are willing to agree to a timeframe of up to 50, 75, or 100 years while the forest grows back. This lag time doesn’t help us much in this age of climate disruption when we need the earth’s forests to do the important job of sequestering atmospheric carbon. The “myth of carbon neutrality” has been bolstered by a well-funded public relations campaign, relentless industry lobbying, and resulting legislation at the state and federal levels. Playing fast and loose with science comes straight from the energy industry’s playbook and is no different than the deceptive public relations campaigns used by the ‘climate-change’ deniers, as well as the smoking causes cancer deniers, who invented the tactics. This is classic greenwashing!

What is the “carbon loophole”?

Policymakers in the past devised rules for how to count the carbon emitted into the atmosphere from energy sources and activities. In the case of biomass, a well-intentioned rule was established in which the carbon would be counted when the wood was cut rather than when the wood was burned. A problem arose, though, because CO2 was not counted when trees were cut in the US (as the rule stated), and was also not counted when they were burned in the UK as pellets. As is covered in the film, a rule that was designed to prevent double-counting became a situation in which the CO2 was not counted at all. This breakdown in the accounting system was pointed out in the scientific literature but has been conveniently ignored by the biomass industry, which saw a way to use the miscalculation to reap huge subsidies for switching from coal to wood, a shift which results in more CO2 pollution, not less.

What about burning wood for residential or community-scale heat or combined heat and power (CHP)?

Scale, efficiency, and emissions should be in the forefront when answering this question. In thinking about heating choices on the individual level, wood pellets have a higher carbon footprint than cordwood because of the energy that is involved in their manufacture (cutting, transport, processing). On a community-scale (schools/colleges, municipal buildings, co-located housing developments), using wood for heat is 75 percent efficient, which is far superior to the 25 percent efficiency of burning wood solely for the generation of electricity. Combined heat and power (CHP), or cogeneration, is the most efficient use of wood at about 85 percent efficiency. From a climate standpoint, any smokestack or combustion process produces CO2 and so is not truly renewable and should be avoided as we search for non-carbon producing solutions such as wind and solar. Air pollution is another factor not to be ignored when considering the growth of biomass and the burning of wood for either heat or power. Asthma rates are high in states where wood burning is common, making air quality regulation of biomass-fueled power plants all important and often contentious. The American Lung Association has come out against biomass.

What is a biomass incinerator?

Some biomass power facilities burn pellets, some burn wood chips, and then there are some that burn post-industrial waste. The Energy Justice Network follows the waste-from-energy industry, which is inextricably tied to the biomass industry and is permitted to burn many materials with some percentage of organic (or biological origin) components, but which might also contain many other components, some highly toxic and carcinogenic. Because these biomass incinerators are lumped under the umbrella of biomass facilities, they face a different and less stringent set of air pollution regulatory standards. In addition, these facilities are often sited near low-income communities who then must face the health issues that accompany the pollutants coming out of the stack, despite the regulations about scrubber and precipitator technology that would be applied if the biomass plant were designated a true incinerator. As with biomass, many people don’t know that there is a related industry dedicated to turning trash into power and profits.

What would happen if the biomass industry was not subsidized?

If subsidies were removed, the biomass electricity industry would collapse almost overnight. This has been demonstrated in the heavily forested New England states of New Hampshire and Maine where legislation for continued subsidies has been recently defeated or blocked. In those states, biomass power plants have shuttered almost immediately when faced with the financial reality of competing with traditional fuels and true renewables, such as wind and solar. The deeply entrenched timber and logging industries in these states have fought tooth and nail to protect their free lunch using the argument of protecting jobs and stimulating the economy. This classic argument to protect a small number of jobs, rather than consider the larger climate implications or the competing interests of the much larger tourism industry, is being countered with investment in workforce retraining programs, much like what has happened in the coal industry. If you look back at the history of technological development, you will find a continuing evolution as technologies become outdated and are abandoned.

What solutions exist for our energy future if biomass is ruled out?

All discussion of energy solutions should start with a consideration of climate. Scientists from WHRC see trees and forests as a bridge to a fossil-free future. But not using them as fuel: using them instead as a buffer against the climate chaos that CO2 from burning fossil fuel has created. The logging industry takes the position that since they have been using the free gift of wood for centuries that it’s their right and our obligation to let them continue this practice in the future. But technologies become outdated — there is a long history of such evolution. And the technology of burning wood to generate energy is an eighteenth and nineteenth century idea. It’s time to move on. There are better, more appropriate, more truly sustainable ideas now about how to generate electricity, especially in the context of climate chaos and collapse.

What is the projected growth of the biomass industry if left unchecked?

According to recent reports from the Environmental Paper Network (EPN), an NGO focused on the use of forests, “Global supply of and demand for forest biomass is predicted to increase more than 250% over the next decade, having already doubled in the last ten years. Biomass energy, predominantly forest biomass, dominates ‘renewable’ energy production, dwarfing wind and solar and undermining their prospects by diverting subsidies that should be applied to such genuinely low emissions technologies.” The report also stated that demand for industrial wood pellets exceeded 14 million tonnes in 2017 and that in the next decade, it is expected to more than double to over 36 million tonnes, with the biggest increases expected in Europe, Japan and South Korea. Looking further ahead, EPN reports a 7-fold increase by 2050 as compared to 2013 levels.

How much wood is burned in a biomass plant per hour/day/year?

The Partnership for Policy Integrity’s (PFPI) Biomess101.org website provides an answer to that question. As a rule of thumb, a power plant burning wood chips requires about 12,500 tons of wood per megawatt, per year. So a 50 MW plant will burn about 625,000 tons of wood per year or over 1.25 tons per minute. The total is the equivalent wood you’d get by clear-cutting 6,000–10,000 acres of forest per year, depending on the location and age of the forest. In more understandable measures, this is the equivalent of approximately an acre every hour. A plant burning wood pellets requires even more forest harvesting, because making pellets is so resource-intensive.

Is there hope to stop the biomass industry?

As filmmakers, we have to be hopeful that people will recognize that there are higher and more important uses of our precious forest resource than for the inefficient generation of electricity. Forests provide us with various “externalities” including clean air, clean water, flood control, biodiversity habitat, and carbon sequestration — all of which are never financially considered — as well as quality timber for a variety of uses. They can also serve as a prime nature-based solution for the global climate chaos that we are now facing. If we didn’t have hope that our film would be able to change hearts and minds about resource practices and energy policies, we wouldn’t have made the film. As a first step, people just need to know about the industry practices and energy policy decisions that have created this situation. The film provides viewers with that background, debunks the greenwashing that they may read in various publications, and opens eyes to the profit-driven practices of the timber and logging industries.

What can I do?

Personal engagement starts with awareness. Once informed, if you feel motivated to act, there are a number of ways to get involved. Contact a local or regional NGO that is involved in the issue. Sign petitions, write letters, donate money. Host a screening in your community. Get involved by volunteering, campaigning, or protesting. These actions may at times feel like yelling into the wind, but they do work. Letters to the editor can change another reader’s mind and so on. Screenings build awareness, fuel outrage, and stimulate further action. Policymakers may see the writing on the wall when enough constituent voices speak up. The struggle to redirect energy policy can seem impossibly hard sometimes when all you can do is take what appears to be small actions. Change can take time and requires persistence. Change happens slowly — until it doesn’t. With enough people and persistence, that “tipping point” will be reached.